Summer and fresh corn on the cob are one of those perfect pairings, like peanut butter and jelly, or chocolate cake and milk.  As a child I only remember eating yellow corn which we always bought with the husk on, thinking they were fresher that way.  (I still can’t bring myself to husk the corn at the market even though it would mean less mess in the kitchen) My mother boiled that corn forever, not knowing that it only needed a few minutes to cook.  It certainly never occurred to us that we could eat it raw.  She always told my sister and I that in Poland corn and tomatoes were food for cows, not humans.

When our children were little, we often went to Toronto during the summer to visit their paternal grandparents.  One of the places we enjoyed visiting was Puck’s Farm outside of Toronto.  It was a wonderful old-fashioned farm with a barn,  a few farm animals, bales of hay to jump in, an area where you could pick your own vegetables, and incredible corn that had just been harvested.  The variety they grew was called peaches and cream, alternating white and yellow kernels, and I had never seen anything like it.  The corn was for sale but it was also available to eat right there, steaming hot ears of corn ready to dip into a huge vat of melted butter.  So simple and so good. Boiling is only one of the ways I now prepare corn, and when I do boil it, it is for no more than five minutes.  I often grill it, constantly turning the ears till they get slightly charred.  Sometimes I cut the kernels off the cob and add them to a salad, raw.  Other times, I throw the raw kernels into a hot cast iron pan with olive oil,  salt and pepper, and some shredded basil.  It’s all good but, truth be told, none of it is as sweet as it was on those summer days when we watched our children eating corn on the cob with melted butter dripping down the sides of their smiling faces. 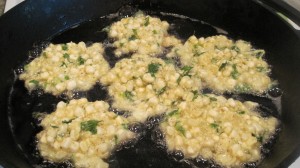 Cut corn off cob and put in mixing bowl. Add eggs, slightly beaten, and matzoh meal to bowl. Mix well. Thinly slice scallions and add to mixture along with coarsely chopped cilantro. Season with salt and pepper. In a cast iron pan heat oil till hot. Drop large tablespoons of corn mixture into hot oil. Let cook till golden brown then turn over.

Warning: Corn pops in the frying pan so be careful!!!