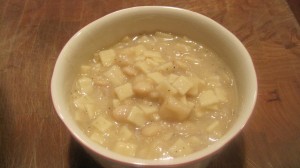 I just began reading a book about five immigrant families who lived in a tenement on the Lower East Side of New York at the turn of the century.   97 Orchard details the hardships that each group faced upon their arrival to the New World, and goes on to talk about the culinary influences that they had on the New York food scene.

The Lower East Side was one of the places that my mother took us shopping.  The streets were teeming with people going through tables piled high with merchandise, strategically placed outside of the merchants’ storefronts.  You could buy anything and everything in this relatively small area.  There were stores selling undergarments and socks, bags and luggage, silver stores filled with Kiddush cups and candelabras, and, of course, food vendors and restaurants.  Many of the signs were in Yiddish, the language of the Eastern European Jews who frequented the area around Orchard Street.  I remember having an occasional meal at Ratners, a large dairy restaurant known for their onion rolls and Kasha Varnishkes.  There was Yonah Schimmel, the tiny shop that offered a variety of knishes, beyond potato and cheese.  The Streit’s Matzoh Factory (still working on a pulley system) was on the Lower East Side as were several pickle vendors that also offered delicious pickled green tomatoes.  Of course, Russ and Sons (now Russ and Daughters) offered all kinds of dairy and smoked fish. We called it an appetizing store.  What an exciting and colorful way to spend the day.

In 97 Orchard, there is the recurring theme of assimilation, something every immigrant family faced at some point.  For me, the differences were magnified by what was waiting inside my brown lunch bag.  My lunch looked nothing like those of the “American” kids.  There it was, the unsightly wax paper folded over a substantial sandwich made with hearty rye bread, filled with sliced salami, bologna, tuna or egg salad.  The Americans would open their lunch bags and the difference was startling.  Delicate white bread sandwiches filled with just one slice of meat or cheese, maybe peanut butter and jelly, cut on a diagonal and wrapped in plastic wrap.  No strong smells, and no mess.  It is hard to believe that I could have possibly preferred eating Wonder Bread, that generic loaf that formed a doughy mass and stuck to the roof of your mouth.  It stems from the need to belong, to be accepted and welcomed in to the larger society.  At some point I realized that rye bread was earthy and hearty and delicious and that garlicky salami is superior in every way to a square slice of orange cheese.

Next month I will be in New York City and my sister and I plan to go to 97 Orchard Street, now The Tenement Museum.  We may walk over to Yonah Schimmel and have a knish with mustard, stop by the Pickle man, go to Russ and Daughters, and embrace the wonderful foods of our childhood.

This simple soup was a staple in our home.

salt and pepper to taste (should be very peppery)

1 package small square noodles, cooked according to directions on package.

Place beans,  onion and water in large pot.  Add salt and pepper.  Cover pot, bring to a boil and then lower heat.  Cook soup for about an hour and a half or till beans are tender.  Taste and adjust seasoning.  Remove onion, and add butter and noodles to soup.  Serve hot.  Serves 6