Latkes for a crowd 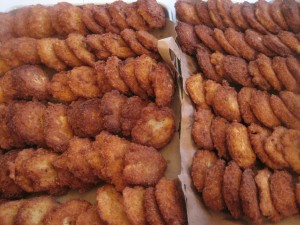 Sometimes it really is the little things in life that makes you happy.  Today I had a perfect afternoon.  I came home from work early, planning to make my latkes so I could freeze them, something I don’t normally do but this year I needed to make lots of them.  Unexpectedly it began to rain which only added to the coziness of the kitchen.  I turned on my favorite radio station which plays Christmas songs this time of year, (I happen to love Christmas music) and peeled ten pounds of potatoes.  I know it sounds crazy but to actually have the luxury of spending a weekday afternoon in the kitchen felt decadent.  It took about 3 1/2 hours from start to finish but during that time two friends came to visit, one carrying lattes for each of us.  Rain, that distinctive smell of latkes frying, music, friends, and good coffee.  It doesn’t get better than that.  Happy Holidays.

This recipe made exactly 150 latkes.  If you want a smaller version, here is the recipe I normally use for latkes. 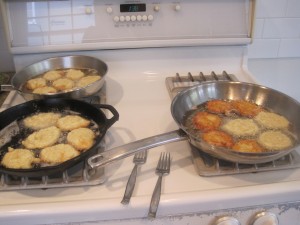 Potato Latkes for a crowd

Pour oil into three large frying pans until oil comes halfway up the sides of the pan.  In the meantime, in batches, fill the bowl of a food processor with potatoes and a handful of onions, and process till mixture is fine.  Pour into large mixing bowl and add 3 beaten eggs, 1 1/2 tsp salt, and 3/4 cups matzoh meal.  Mix well.  When oil is hot, place large spoonfuls of mixture in pan but do not overcrowd.   Fry till golden on one side and flip over.  Serves 35-40 people.

16 thoughts on “Latkes for a crowd”