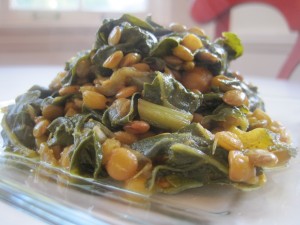 he Graf brothers all loved nature, the outdoors, and animals.  My father would watch shows about the animal kingdom and would tell us stories of the pets he owned growing up in Warka, Poland.  A porcupine, really?  He was already well into his seventies when he suddenly decided to stop eating chicken and beef, purely for ethical reasons.  With longing and affection, my father would talk about the orchard and vegetable garden behind his mother’s home.  At the farmer’s market he would choose his fruits and vegetables with such care and tenderness, rotating each apple or pear to make sure it was blemish free, fresh, firm, and fragrant with ripeness, intent on selecting the best he could find.

The brothers were all avid gardeners, and I was fairly certain that their green thumbs were not passed down to my city hands.  I love the idea of gardening, to be able to go into your backyard and plan your meal based on what’s ready to be picked.  After a long hiatus, I was determined to try my hand at vegetable gardening once again and so I ruthlessly pulled out a whole bed of roses.  It took months to prepare the soil and put in the first raised bed.  During a trip back East my cousin Janine laid out the plans for my garden and I use it as my roadmap.  Not only does it guide me but it provides me with inspiration,  knowing that another branch of the Graf family are successful gardeners.  My first planting included broccoli which was a complete failure, basil which was immediately consumed by insects and several plants of red leaf lettuce which grew well, but became limp immediately after being harvested, not a desirable texture for a fresh salad.  I thought I would try kale and swiss chard and finally I was able to experience the sense of pride that comes with success.  There is more chard and kale in my garden than I know what to do with.

My father would probably chuckle at my meager garden but despite its small size, the pleasure that I derive from it is immeasurable.  My father and I never gardened together, I was too young and independent to listen to his advice when he offered it, but now each time I am in the garden I think of Harry, Charlie and Jack, and the legacy they left behind. 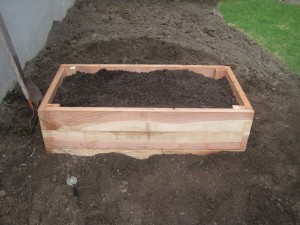 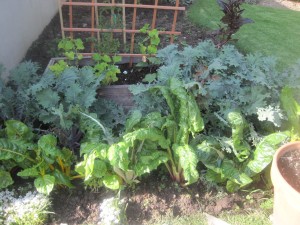 This dish is a vegetarian stew but so hearty that you really don’t miss the meat. Serve with rice or whole wheat pasta.

Saute onion in olive oil till golden.  Add spices and sauté for several minutes, till fragrant.  Add broth and bring to a boil, then put in lentils and garbanzo beans.  Lower heat to a simmer, add salt and chard, and cover.  Cook till lentils are tender but still whole.  About 20 minutes.  Serves 6