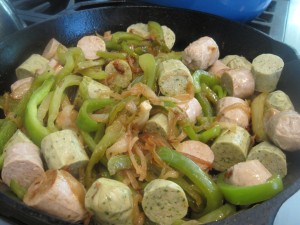 Recently I have eaten more hot dogs, hamburgers, and sausages than I normally would in the span of a few weeks, mainly because it’s summertime and everyone is busy grilling.  Typically I would try a bit of everything but as the weeks have gone by I realized that hamburgers (even the Brazilian style burger we made with a pan-fried egg on top) just can’t compete with a really good hot dog or sausage.  When I was growing up franks and sausages were part of the culinary scene among both Jewish and Italian immigrants.  Three preparations come to mind.

The salty scent of frankfurters remind me of Ben’s Kosher Deli which was located on the Concourse and 183rd Street.  The hot dogs were prepared in the front window where they shared center stage with salamis, large and small, suspended from the ceiling, drying.  The hot dog buns were the perfect texture, soft and fresh, the mustard was traditional yellow deli mustard, and the sauerkraut warmed to just the right temperature.  Of course the only suitable drink was a Dr. Brown’s Cream Soda.  The best part of the meal was undoubtedly the first bite, because nothing could compare to that immediate burst of flavor.

Another favorite was a dish my mother made using kosher knockwurst, a larger, plumper hot dog.  According to my sister it was called choucroute and my mother learned to make it in France.  The preparation was simple.  My mother would dice a large onion and brown it in a little vegetable oil in a large pot.  She would then take a jar of sauerkraut and rinse it, and add it to the caramelized onions, along with about 3 cups of water.  To this she would add a few meaty beef bones, season the dish with salt and pepper, cover and cook it for about an hour and a half.  She would then add a package of knockwurst and let simmer for another hour.  It was a hearty winter dish, served steaming hot on top of mashed potatoes.

Finally, if you went to the Bartolinis on a Sunday,  you would get a whiff of the Italian version of frankfurters, Italian Sausage and Peppers.  A simple dish that combined sausages, onions, and green bell peppers, all sautéed till golden brown and piled into a crusty Italian roll.

For those of you would never consider eating hot dogs and sausages, there are now vegetarian, chicken, turkey, tofu and “low-fat” versions.  Personally, I prefer mine fully leaded, with either a cold cream soda or a beer.

2 large brown onions, cut in half and then thinly sliced

Heat olive oil and over a high flame, browning  sausages.  Add onions and peppers, reduce flame and cook till onions are caramelized and peppers are tender.  Add some chili flakes if you like it hot.  Pile high in a crusty Italian roll.

6 thoughts on “Italian Sausage and Peppers”