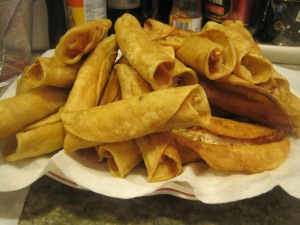 Some family patterns are repeated from generation to generation.  When I was growing up it wasn’t unusual for my mother to make three different entrees for the four of us.  My parents would share one main course, but in addition, my mother often prepared whatever it was that my sister and I each craved.  I now see that it was just a “crazy” thing to do, but it is a pattern that I repeated with my own children.  Food was love and nobody was ever expected to eat something they didn’t care for.  Meals were about enjoyment, pleasure, and indulgence.

Last week all four of my adult children were coming to town to attend the wedding of family friends.  Two were arriving in time for Shabbat and not knowing exactly what each one would want for dinner, I covered all the bases.  I prepared enough food for ten, completely unable to cook for four.  I made Matboucha (a Moroccan tomato salad) to start with, followed by chicken soup with matzoh balls.  The main course included shredded brisket that was braised for ten hours, baked honey garlic chicken, roast potatoes, sautéed Bok Choy with shiitake mushrooms, and a green salad.  Dessert was fruit, and brownies covered with a layer of caramel and sea salt, an Ina Garten recipe.  I guess I went overboard, but as a result we had lots of leftovers.  On top of it all, I still had to do something with that soup chicken.  My mother used to serve the soup chicken as a main course (one reason that she was forced to make something different for my sister and me,) and my mother-in-law used it as filling for knishes or shepard’s pie.  I decided to make Chicken Taquitos.

During the course of the weekend, as the kids devoured the Taquitos, they shared some “constructive criticism.”  One son suggested that next time I might consider adding some diced potatoes or chunks of avocado, and another said the Taquitos could   have used more seasoning and cilantro.

On Wednesday morning we woke up to a much quieter household and I decided to get up and clean out the fridge before I left for work.  The leftovers were gone as were three of the four children, and there wasn’t a Taquito in sight.

1 tsp salt and ½ tsp pepper
In a large bowl, skin, bone, and shred cooked chicken, and set aside.  In 2 tbsp oil, sauté sliced green onions for about 3-4 minutes and add to shredded chicken along with salt and pepper to taste.  At this point you might want to add some diced pre-cooked potatoes, taco seasoning, chopped fresh cilantro, or some avocado chunks.  Add chicken broth to moisten the mixture.  Warm tortillas in microwave, wrapped in a slightly damp paper towel or in a tortilla warmer, till soft enough to roll.  Place about 2 tbsp of chicken mixture at the bottom part of the tortilla and roll tightly.  Place tooth pick through the flap to hold Taquito together.  Add enough oil to a large frying pan so that it is about 2 inches deep.   Place pan over med-high heat till hot, and fry Taquitos till golden brown on one side and then turn.  Cook about 3 minutes per side.  Serve hot with salsa and guacamole.  Serve 2 to 3 Taquitos per person.
Enjoy,