It was the summer of 1972,  I was 16 years old and I was going to Israel for the first time. The trip was organized by Hadassah, six weeks long, we were to spend a week on kibbutz, a week on Gadna (pre-army training camp) at Sde Boker, and the remaining month touring.  After we arrived, we drove to Jerusalem and were taken to our residence, Beit Riklis on Mt Scopus.  There was a brief orientation after which we were sent to our rooms and told ” lights out.”   But we were 16 year olds, naïve and foolish, and it didn’t take long before we decided to sneak out.  We began walking down the road  but our adventure soon ended when a Volkswagen pulled over and the driver, a middle-aged man, asked who we were, what we were doing, and where we were going.  He yelled at us, and made us pile into the car so he could return us to the safety of the dorm.  That was the first, but not the last, time that we got into trouble that summer, a summer filled with adventure and new experiences, exactly as it should have been. Of course, I remember the food as well, my first taste of Falafel, of ice-cold Choco, of perfectly diced Israeli salads made with ripe red tomatoes and crunchy cucumbers, the centerpiece of those incredibly lavish Israeli breakfasts (my normal breakfast of Frosted Flakes and milk was no match). For weeks now, Israel is never far from our thoughts.  We worry, listen to the news on an hourly basis, and check in with family and friends who live there.  I spend time reminiscing, thinking about that summer, and the year that I later spent on Kibbutz Usha.  I think about how lucky I was to have those experiences, as were my husband and children during the time they spent in Israel.  I think about how different this summer is, and hope that very soon, Israeli teenagers will once again be living in peace, and American teenagers will once again be taking their first trips to Israel, getting into trouble, and having a summer filled with adventure and new experiences, exactly as it should be. 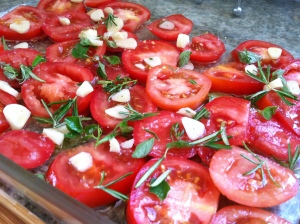 Oven-Roasted Herb Tomatoes When I spent time with our family friends on Kfar Meishar, a Moshav outside of Gedera,  I was always amazed at how quickly delicious salads would appear on the table, with what appeared to be little effort.  With a surplus of tomatoes in the garden,  many of which I used for Israeli salad, I decided to roast some.  I sliced them, placed them in a glass dish (avoid using metal that could react with the tomatoes) sprinkled them with a small handful of chopped herbs, also from the garden ( I used sage, oregano, rosemary and tarragon),  added 6 cloves of garlic, thinly sliced, a little sea salt and  drizzled Israeli olive oil over the top. They were a great addition to a breakfast of fried eggs, feta cheese and olives. Bake at 325 for about 1 1/2 hours. Enjoy, Irene