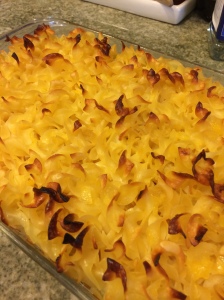 Superstition comes to me easily.  I can’t take all the credit, some of it was passed down by my Eastern European Mom who would be very proud of how successful she was in training me to look for “signs” everywhere, both good and bad.  Unfortunately there were a few minor glitches that happened to me this week, but the fact that they happened right before Rosh Hashana raised every superstitious hair on my head.

First it was a missing cookbook that I spent hours looking for over a period of a week or more.  Then I misplaced my reading glasses which was problematic since I was trying to look through cookbooks, and then yesterday there was a third (they say bad things happen in threes) “incident.”  I  took my very large brisket outside to place in the back fridge, opened the garage, made room in the fridge, closed the fridge and the garage, and completely forgot about the brisket sitting on the ledge.  It sat in the 95 degree heat for over 8 hours, cooking.  I called my sister and she had the perfect response, she said “kapparah,” and added that she hopes that’s the worse thing that happens to me in the coming year.  Amen.

Then things turned around, I found my cookbook, Norm found my glasses, my friend Judy bought me the first in the series of that cookbook which made me realize that I had owned the second, and I made short ribs in place of brisket. My mood lifted, maybe the signs weren’t so bad after all.

Today, I spent the day cooking a completely traditional meal that didn’t need much thought or creativity.  It is pretty much a duplicate of my mother’s yontif meal which was always the same. Growing up there were two things that were predictable when it came to the holidays.  What would be served for dinner and what you wore to Shul.  There was an unspoken dress code that included delicate ankle socks , black patent leather Mary Jane’s, a new dress for the New Year,  and hair neatly combed back out of my face with the help of  a thin velvet hair band.  Dinner was  Gefilte fish, chopped liver, chicken soup with kreplach, garlic chicken with roast potatoes, pineapple kugel and apple cake for dessert.   Predictability can be good, but clearly it doesn’t always work out as you hope.

So as we head into the New Year, I hope that most of the signs I see are good ones, and as my mom always said, may the New Year be better, and no worse.  Here is a family favorite to help sweeten the year.

1 20 oz. can crushed pineapple in juice

Preheat oven to 350 degrees.  Boil noodles per directions on package but for no more than about 6 or 7 minutes. Drain.  Place noodles in a large bowl, add remaining ingredients and mix well.  Pour into 9 x 13 greased Pyrex and bake for about 45 minutes.  Serves 10-12