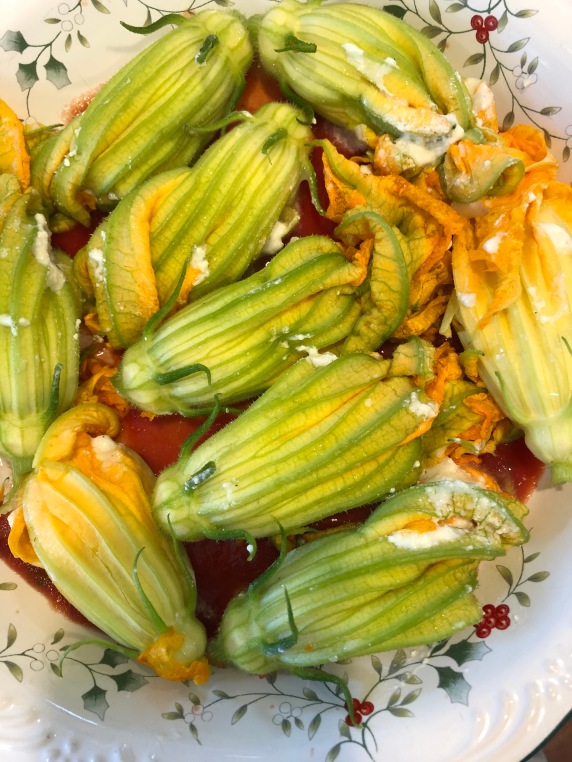 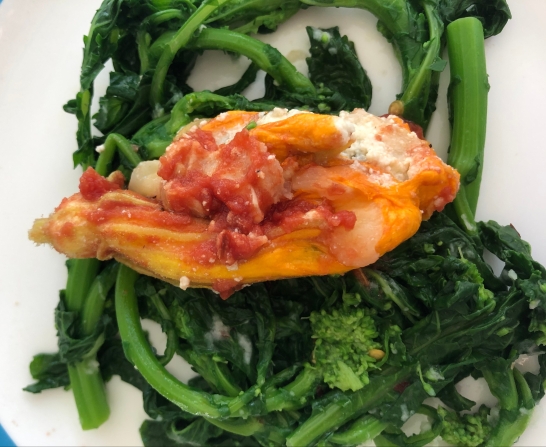 My paternal family, the Grafs, had an appreciation and love of nature that they passed down to the next generation and, especially now, I am so grateful for that gift. The family came from Warka, Poland, and my father and his brothers often spoke of their childhood home which had fruit trees and a vegetable garden behind the house. I don’t remember my father ever gushing over a steak or roasted chicken, but a bite of a perfect tomato or apple would often result with his enthusiastic one-liner,  “DELICIOUS.”
In my parent’s home, fruits and vegetables were plentiful, fresh, and seasonal.  No T.V. dinners or canned soups, no shortcuts in the kitchen.  My mother walked to the market for fresh produce every day, dragging her shopping cart behind her.  Dinner always included a green salad, dressed with lots of lemon and pepper.  We ate asparagus and artichokes, served with a tangy vinaigrette.  Mushrooms were cooked in soups, or sauteed and mixed into homemade farfel.  Beets were used to make cold borschts, as was sorrel (schav). Carrots were carefully diced, simmered with sugar, and thickened with a little flour. They had a rich glaze which I’ve never been able to duplicate.  Potatoes reigned (we are Polish) but my favorite preparations were eating them mashed with lots of butter and warm milk,  or sliced and sauteed in butter till golden, after which beaten eggs were poured over top.  For Shabbat dinner, Russets were quartered and roasted on the bottom of a pan of garlic chicken absorbing all the delicious drippings.
Sundays, as with many families, was dedicated to bagels, lox and cream cheese but upstaged by the beautiful platters of New Jersey tomatoes, crisp cucumbers, spicy red radishes, wedges of green peppers, and slices of refreshing kohlrabi. Dessert in our home was fruit.  Depending on the season, it could be an apple or pear, grapes, oranges, or a bowl of red cherries, all eaten in front of the T.V.   My father turned peeling fruit into an art form, it was intentional and purposeful and reflected how much he loved a good apple or pear.  In the summer, my Mom baked cakes and buns with blueberries that we picked in Lakewood, New Jersey, where my aunt and uncle lived. She packed raspberries into glass jars with vodka and loads of sugar, and kept them on the bottom shelf of the  kitchen cupboard till the solution magically turned into a sweet cordial.
So it is not surprising that I have been gardening for most of my married life.  It’s a Graf thing.  My success has been uneven.  I have great artichokes, sorrel that has produced leaves for 30 years, delicious blackberries and a very happy Lemon Verbena. The pomegranate tree has half a dozen fruits for the very first time.  Every summer I optimistically plant tomatoes, zucchinis, and maybe some peppers or eggplants. I tell myself the same words that I say to my grandchildren, “keep trying, don’t give up, and you can do it!”
Sunday, I had my first outing in almost four months and chose to go to a farm, Underwood Family Farms in Simi Valley, where you can pick your own fruits and vegetables. As soon as I arrived, I could smell a sweetness in the air from the berries, and the stress of the past four months melted away.
We took our time, walking up and down row after row of raspberries and strawberries, patiently looking for the largest berries that were the perfect shade of red.  We moved on to the field of zucchini plants, topped with those beautiful yellow flowers that were fully open in the morning sun, perfect for stuffing.  Each flower had a bee or two buzzing inside, but even that fear-inducing noise couldn’t deter me, nor could the very prickly stems!  We found a potato patch, where I dug potatoes for the first time ever, sticking my hands into the dark soil and using my fingers to feel for the round tubers hidden under the earth.  Getting my hands dirty was never more fun!! There were rows of pickling cucumbers, and I decided to try making kosher pickles.  On our way out there was a row of small bushy plants that I couldn’t identify, but when I looked closer, there were tiny French green beans hanging on the stems, and even though I was tired by then, I had to pick just a few.
My fridge is now full of fruits and vegetables, and I came home full of inspiration. My children keep encouraging me to expand the garden and grow more vegetables. I appreciate their confidence, but it is also daunting.  Tomorrow half barrels are being delivered so I can move my eggplants and zucchini plants to a new location where I hope they’ll be happier.  And if they aren’t, well,  I won’t give up, I’ll keep on trying, and maybe, I can do it?!  But if not, I’ll be very happy to take another trip to the farm. 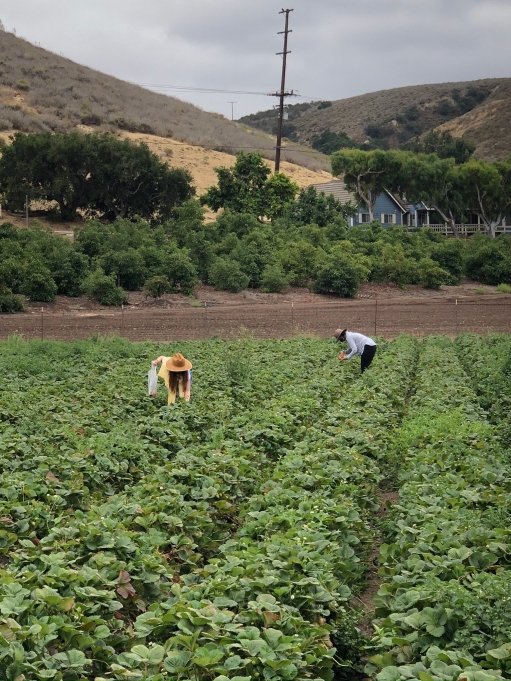 With my daughter-in-law Anna picking strawberries 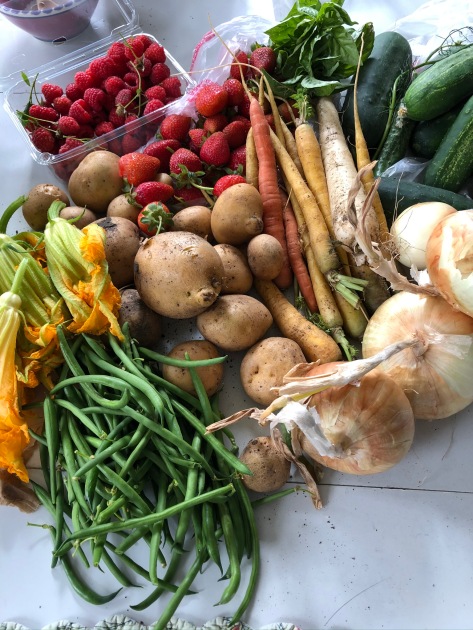 I am currently obsessed with Rosetta Constantino, a cookbook author who I follow on Instagram, and from whom I learn something new about food and gardening every day.  After watching her stuff squash flowers, I was inspired to try it. Since all I had was Anaheim peppers, I used them instead and the results were great!  Today I used the squash blossoms that I picked on Sunday,  but this would be equally good in any vegetable you can stuff. It’s not really a recipe so play with the flavors and ingredients.

Ricotta Stuffed Zucchini Flowers
6 squash flowers or Anaheim peppers
2 cups ricotta
3/4 cup shredded mozzarella
Freshly grated parmesan
salt and pepper
red chili flakes
1/4 cup fresh basil, shredded.
4 cloves fresh minced garlic
Preheat oven to 375 degrees.
Tomato Sauce
I used one small can of tomato sauce and simmered it on low for 20 minutes with 1 garlic clove, a little of the shredded basil, salt and pepper to taste, and some chili flakes.  This will be more than you use for this dish.
Preheat oven to 375 degrees.
In a bowl, mix ricotta with 1/4 cup of the mozzarella (save the rest to sprinkle on top), grated parmesan, shredded basil, 3 cloves of garlic, salt, and pepper.
Carefully open the blossoms, or Anaheim peppers (see Note), and evenly distribute the filling among the vegetables.  Close the vegetables around the filling, if using squash blossoms, then twist the tops closed.  Place some of the tomato sauce in a small and shallow baking dish.  Place veggies on top, spoon a little tomato sauce over each blossom or pepper, then some mozzarella cheese and a little more grated parmesan.  Bake for about 30 minutes.
Note:  If you use Anaheim peppers then they need to be peeled and seeded.  Brush peppers with a little olive oil on each side and place in 400 degree oven in shallow baking dish till peppers are slightly blistered.  Then remove with tongs and place in small paper bag. Close and leave on counter till cooled after which you can easily peel off the skin.  Open to stuff and remove seeds.
Enjoy,
Irene